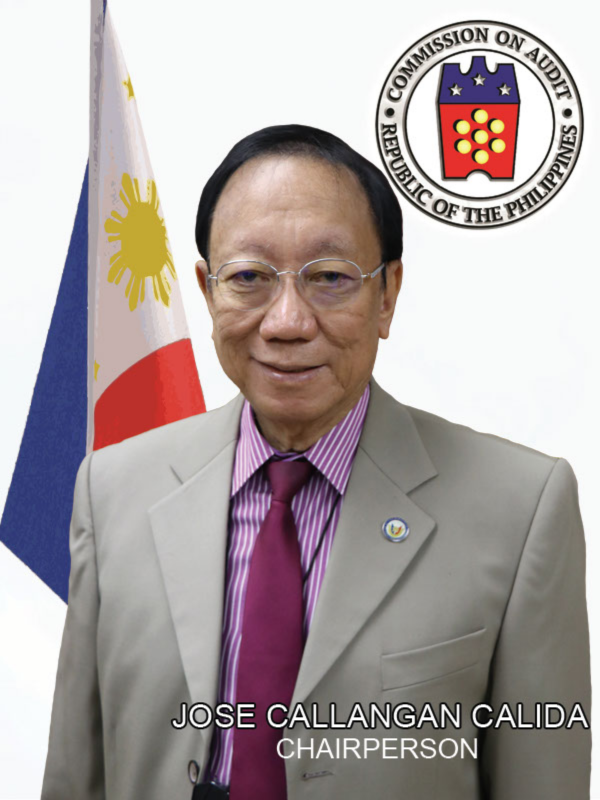 Chairperson Jose C. Calida was appointed as Chairperson of the Commission on Audit (COA) of the Republic of the Philippines effective 4 July 2022. Chairperson Calida has almost five decades of expertise in the practice of law, specializing in litigation, Anti-money Laundering Law and Dangerous Drugs Law.

Prior to his appointment as COA Chairperson, he served as Solicitor General of the Philippine government since July 2016. He served as Undersecretary of the Department of Justice (DOJ) from 2001 to 2004. As DOJ Undersecretary, he was in-charge of the National Bureau of Investigation, Witness Protection, Security and Benefits Program, Office of the Government Corporate Counsel, DOJ National Task Force on Terrorism and Internal Security, and DOJ Task Force on Financial Fraud and Money Laundering. He was also head of the DOJ Action Center which extends free counseling and assistance to the public, especially to indigents.

He also served as Executive Director of the Dangerous Drugs Board (DDB) in 2004. He conceptualized and implemented various anti-drugs programs including the DDB’s flagship project “Barkada Kontra Droga” on drug prevention and control which was adopted as the government’s model in demand reduction strategy. He served as consultant of the House of Representatives Committee on Dangerous Drugs from 2005 to 2007. He was awarded the “International Award of Honor” by the International Narcotic Enforcement Officers Association in recognition of outstanding accomplishment in the field of Narcotic Law Enforcement

Chairperson Calida was also a practicing lawyer of J. Calida & Associates Law Firm, with fields of expertise in litigation, Anti-money Laundering Law and Dangerous Drugs Law. He was the Senior Vice-President and General Counsel of Prudential Guarantee and Assurance, Inc. (Coyiuto Group of Companies), Chairman and President of Vigilant Investigative and Security Agency, Inc., and General Counsel of Philippine Association of Detective and Protective Agency Operators, Inc. He was a founder, Chairman and President of the Citizens’ Battle Against Corruption and a Member of the Board of Trustees of the Full Gospel Businessmen’s Fellowship International.